Recognized by the industry for numerous accomplishments, here is a list of some of the accolades Bottomline Video & Creative Group has an received for their production: 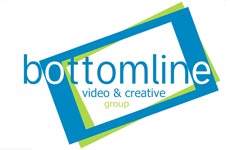